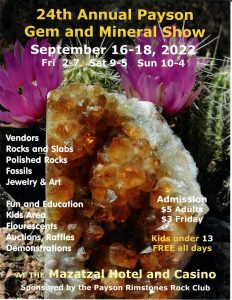 The Club holds its Annual Gem & Mineral Show each Fall. This year’s show was held at the Mazatzal Hotel & Casino Event Center. Gems, minerals, fossils, lapidary equipment, jewelry and jewelry findings, slabs or rough material plus much more were available from our vendors. The Club sponsored an education center for the children and adults with a geologist to answer questions, a Spinning Wheel (where everyone wins a rock!), a magnificent fluorescent mineral display, a free Treasure Hunt for junior rock collectors, beading, sandstone/rock painting, and much more. There were several artisans who provided demonstrations of their crafts, including wire wrapping, stone carving, and jewelry making. A silent auction area for those folks interested in obtaining beautiful minerals and rocks was available, too! All proceeds go toward supporting scholarships for graduating Payson High School students and students who are residents of Northern Gila County attending a college of their choice, as well as books and educational materials for the local elementary schools and public libraries.

Rock and Gem Show season in Arizona and America is beginning to wind down. It was a big year, as many of the shows that cancelled in the last two years returned for 2022. No less than 70 shows were scheduled throughout the country during the first six months of 2022. And we are counting Tucson as only one show, but really it has about 30 shows at many locations in over 4 weeks. This year, there were about 15 shows in Arizona, ranging in size from Alpine, AZ (which had 4 vendors in 2021) to Tucson, one of the world’s largest shows with an estimated 3,400 vendors.

For those who want the full menu of all shows in all states, visit: All Mineral, Rock, Gem Shows, GeoSites, Rock Clubs in USA (www.rockandmineralshows.com). It lets you pick the state and then lists the shows in chronological order. You can also visit www.rockngem.com. It is recommended you verify the show date, time, location and cost with the show sponsor prior to attending.

We have provided a list of the Arizona rock clubs and links to their websites so you can learn more about their rock, gem and mineral shows held during the year.