Our field trip coordinator, Larry Bagshaw, plans a couple of local Club rock hounding trips each month, weather permitting. We also keep an eye out for trips sponsored by other clubs and locales that might be of interest to members.

While there are quite a few dedicated field trippers who rarely miss an outing, in most months groups of about 5-20 form naturally around factors such as specific rocks and minerals native to the trip area, driving distance, the walking terrain, etc.

Below are just a few of the great trips we took together in 2019. While we tend to vary the locations from year to year to keep everyone interested and the experiences fresh, the 2020 trips will no doubt be just as much fun for all! 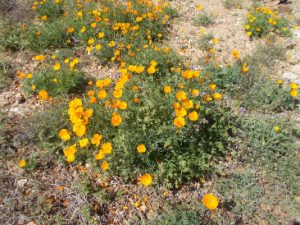 Larry reports, “Plenty of Gold (Poppies, that is). People 24 (20 club, 4 friends), and colorful copper. I was ready to cancel the field trip right up to the last minute, due to rain being forecasted, but it didn’t materialize. It turned out to be a perfect day for the trip – clear, with temperatures in the mid-60s. 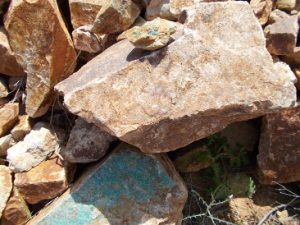 Everyone picked up a bunch of copper ore, with Larry B. and Sarah and Sarianne Rittenhouse tying for the Dave Gillespie (big chunk) award. Thanks to the Rittenhouse red wagon!!

There are two main collecting areas. Once you get near to the mine shack, you take a hard left over a berm in the road and go southwest for about an eighth of a mile. If you don’t take the hard left, you proceed east to an old mine shack. A few vehicles went each way.

Everyone had a great time and picked up azurite, malachite, and chrysocholla pieces. It was great to get out and find a cure for the cabin fever blues of winter!” 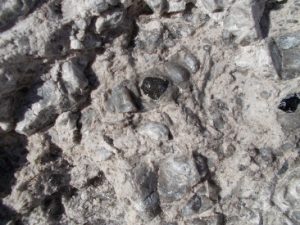 “We were waiting for word from the Apache Junction Club as to whether we could tag along on their apache tears field trip. Dan Jarvis, who a few of us met on the west Hardscrabble field trip, agreed to take 4 (it ended up being 5) along. Barry and Margaret Jones, Larry and Cheryl Knaack, and I (Becky stayed in the car and read a book so we wouldn’t exceed the count) were lucky enough to tag along.

I found about 200 loose apache tears and about a dozen in matrix. The Jones and Knaacks also had good collecting. Dan says that several of their members collected 500-600 tears in the 2 hours we spent there. 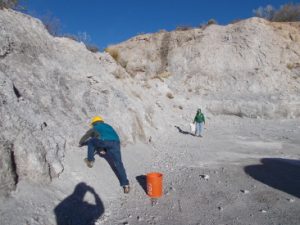 Dan found perlite with crystal-filled vugs which fluoresce. This is the typical yellow to yellow-green chalcedony fluorescence. He also says perlite and apache tears fluoresce deep red to purple. He must be using a different wavelength than the short UV I use,” says Larry. 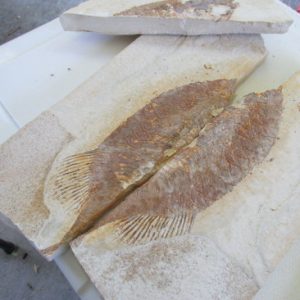 Larry reports, “Early in the morning we headed to Kemmerer, Wyoming. When we got to the digs, we found that Ben and the Bosters had spent part of the prior day digging and were ecstatic! Here again, we encountered the reaction that where else can you high-grade specimens from an area where most of the work has been done for you! We spent all day splitting shale, and everyone found fish–yea! 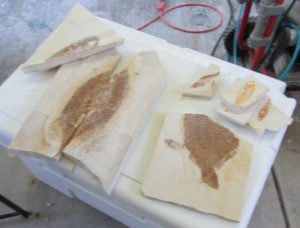 As usual, the first day was a real learning experience. The first thing that you learn is that the drier the shale is, the easier it is to split. Becky and I found mainly partial fish, because the shale in area we staked out was not quite dried enough to get good, big splits. The quarry was having a hard time keeping up with the demand and getting rocks dried out. It got me wondering if the idea would be to truck a few tons of the shale blocks down here to dry in the good old Arizona sun and then split them at our leisure. A real Kemmerer Wyoming. virtual field trip! Since the trip, the Bosters messaged us that they are ready to turn around and do it again! They have a nice sized fish that they sent a picture of, and that I hope they will show and tell at the August meeting. 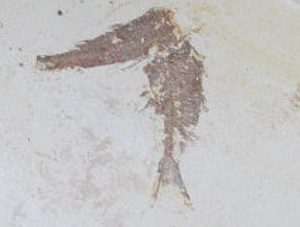 Most successful of all was my son Don’s family. They came back with a couple of dozen small fish, a large and a double-sided partial fish, and a partial skate (stingray)! While we were there one family who came for only two hours of splitting, found a double-sided palm frond. One interesting thing-Don and Joella were concerned that our nearly ten year old granddaughter Paige would be bored with the trip. She got so excited helping her parents, us, Ben, the Bosters, other collectors, and even the workers, that she didn’t even open any of the books that they had brought to entertain her. She kept us well supplied with rocks to split open. 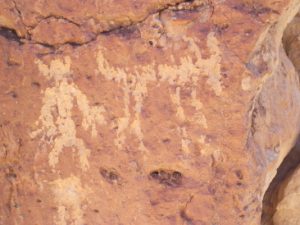 On the way back home, we stopped at a way off the beaten track rock shop near Marysvale, Utah. For those of you who have never been to the Geosearch Rock Shop, I urge you to ask us for directions, and visit it if you are in the area. Keith Barben “only” has a bachelor’s degree in geology, but he knows his area. A lot of his stuff is the standard Tucson resale stuff, but he does have some good prices and operates the shop out of his basement. If you see his brochure, he mentions some Marysvale pictoglyphs, which you can convince him to show you if he has time. He took us and another couple and their children to the sites. The pictoglyphs are interesting since they are carved into volcanic tuff. He also has tumbled Tushar agates, which are interesting if not world class, and will gladly show you where to collect the same.”

Photos and field trip stories on this page thanks to Rimstones Rock Club members Larry and Becky Bagshaw.

PLEASE NOTE: MEETING DAY & CHANGE BELOW
VISITORS ARE ALWAYS WELCOME AT OUR MEETINGS! 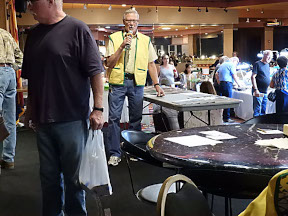 The Club meets most months on the 2nd Wednesday. Our next general meeting is at 3:30pm on October 13th, 2021 at the Payson public library. All are welcome!

Issue with our website? Email our webmaster at [email protected]

Send Us a Quick Message